Although references of the district of Dubai go as far back as 1095, Dubai itself was founded in early 19th century by members of the dynasty of Al Abu Falasa, part of the Bani Yas tribe of Abu Dhabi. The city stayed under the control of Abu Dhabi until 1833, year in which members of another branch of Al Falasi dynasty, under the leadership of Maktoum bin Butti (considered to be the founder of the ruling Al Maktoum dynasty) , took power without resistance. In 1841, a terrible smallpox outbreak forced a lot of the inhabitants to move east to Deira locality. In 1894, Deira in turn was devastated by a huge fire that burnt down almost all of its houses. The people of Dubai though did not give up. They stood back on their feet fairly quickly and by early 20th century Dubai was the regional centre for trading and business with a thriving merchant class that played an important role in the development of Dubai.  The pearl industry greatly contributed to Dubai’s prosperity for the best part of the first quarter of the 20th century.  The collapse of the pearl industry led Dubai and the region to a period of poverty and subsequent instability. 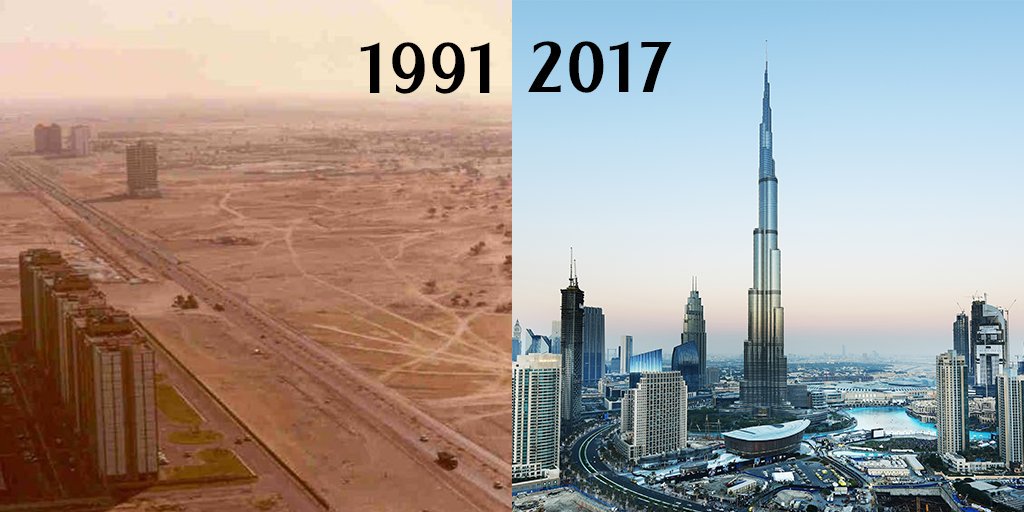 In 1958 Sheikh Rashid bin Saeed became ruler of Dubai. His rise to power found Dubai at a crossroads. During his years of reign, Dubai’s fortunes were reversed by the discovery of oil and oil industry became the main source of income for the emirate. Sheikh Rashid fully appreciated the God given gift of oil and used it for the betterment of Dubai and its people, but at the same time he realized that oil was coming with an expiration date on it. To paraphrase his words “my grandfather and father rode a camel, I’m riding a Mercedes, my children and grandchildren will ride a Range Rover, but my great-grandchildren will go back to the camel”. With that in mind, Sheikh Rashid laid the foundations of a modern and prosperous Dubai.

Sheikh Rashid’s legacy lives through his son, Sheikh Mohammed bin Rashid, the current ruler of Dubai. Under Sheikh Mohammed’s leadership, Dubai has continued with the diversification of its economy and succeeded in becoming the leader of the region in many aspects. In February of 2010 Sheikh Mohammed announced his long-term strategic plan for Dubai and the nation under the title of “Vision 2021”. In November 2013 Dubai was named the city-host of the World Expo 2020. From that moment the eyes of the world are turned towards Dubai, which works intensively to make good on Sheikh Mohammed’s promise that “Dubai will astonish the world with Expo 2020”.