Built in the banks of the Dubai Water Canal, at the very same site of Al Habtoor’s first hotel The Metropolitan, Al Habtoor City is a mix-use complex that includes 3 luxury 5* hotels (The St.Regis, The W and The Westin at Al Habtoor City), 3 luxury residential high-rises, La Perle theatre, The Atrium dining complex, tennis courts and clubhouse and a 5,000 cars parking lot.

Al Habtoor City’s permanent theatre, is situated between The W and The Westin hotels and is custom built for La Perle show.

All the action takes place in the central stage that contains a round pool filled with over 713 thousand US gallons of lukewarm water. Water falls down the ceiling and emerges from the floor, flowing towards the pool. The venue’s advanced hydraulic system can drain the stage in a matter of seconds. A huge metal ball, that is hanging from the ceiling, is used as an integral part of the show. Part of the theatre’s wall collapses and becomes a drawbridge reaching the pool.

The 14-row seating area forms a 270 degrees horseshoe that surrounds the central stage and provides best view for all 1,300 spectators.

THE DIRECTOR AND THE PEOPLE WHO MAKE IT HAPPEN

Franco Dragone, born in Italy and raised in Belgium, is the heart and soul of this unique production. Having directed most, if not all, of the fantastic Cirque du Soleil shows between 1985 and 1998, Dragone is the man who made the contemporary circus part of the mainstream entertainment in America. He also produced and directed numerous shows in Las Vegas and around the world.

A cast of 65 actors, acrobats and dancers give their best self to a performance that leaves the audience ecstatic.

We have to mention also the behind-the-scenes crew, the technicians, the costume and lighting designers, the scuba-divers in the pool who protect the actors and everybody else without whom this magnificent production wouldn’t be possible.

The 90 minutes show is taking the audience through the various stages of Earth’s evolution, the creation of life and its development to the current urban way of living. 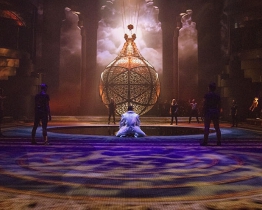 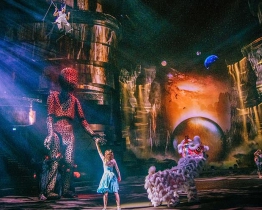 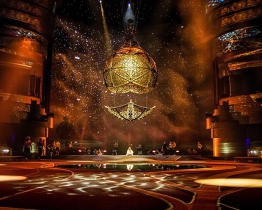 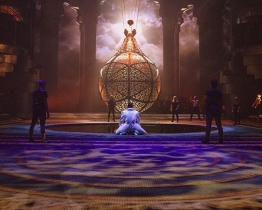